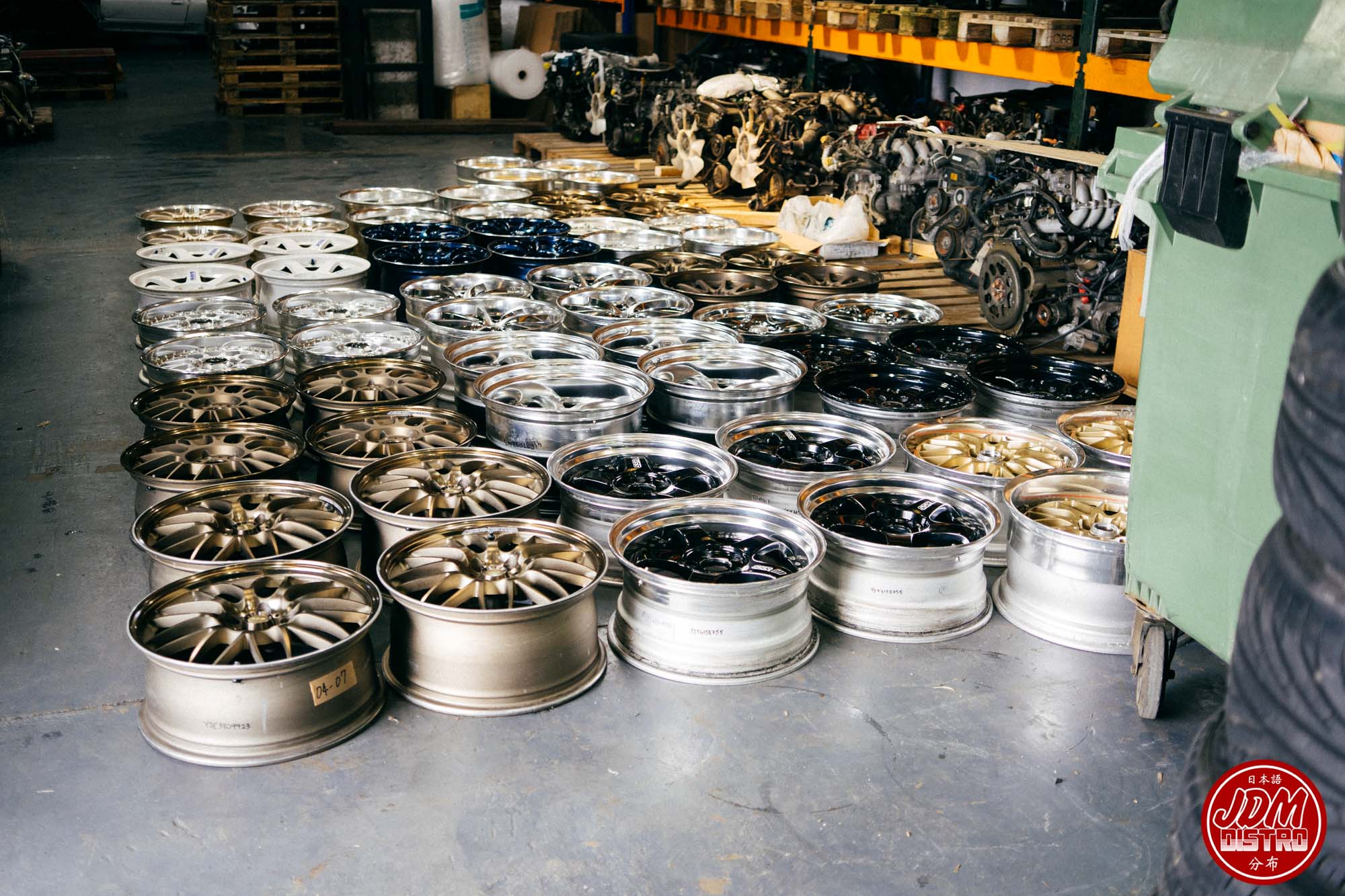 Not long after our container in April, a second container which was half the size of the last one landed right in the middle of May this year. Again it was packed with the coolest parts. I’ve snapped some of the more interesting items from the container and posted them below. Up until this point, I had never seen a set of these E+S SSR Casablancas in real life. Not only that to see such an immaculate set of wheels from the ’80s, but they also looked brand new. This must have had a very easy life, maybe kept in storage all these years?

They still had all their original paint, sticker and asides from what appeared to be light storage marks, they were spotless. Japan was on a roll with these old wheel designs in the eighties, there are way too many models from a stack of cool companies which unfortunately have long since gone out of business. These were made by SSR for E+S but sadly E+S must have lost the rights to these wheels along with many of their older designs. I think there would be a big market for a lot of these older wheels if they decided to reintroduce some of them. 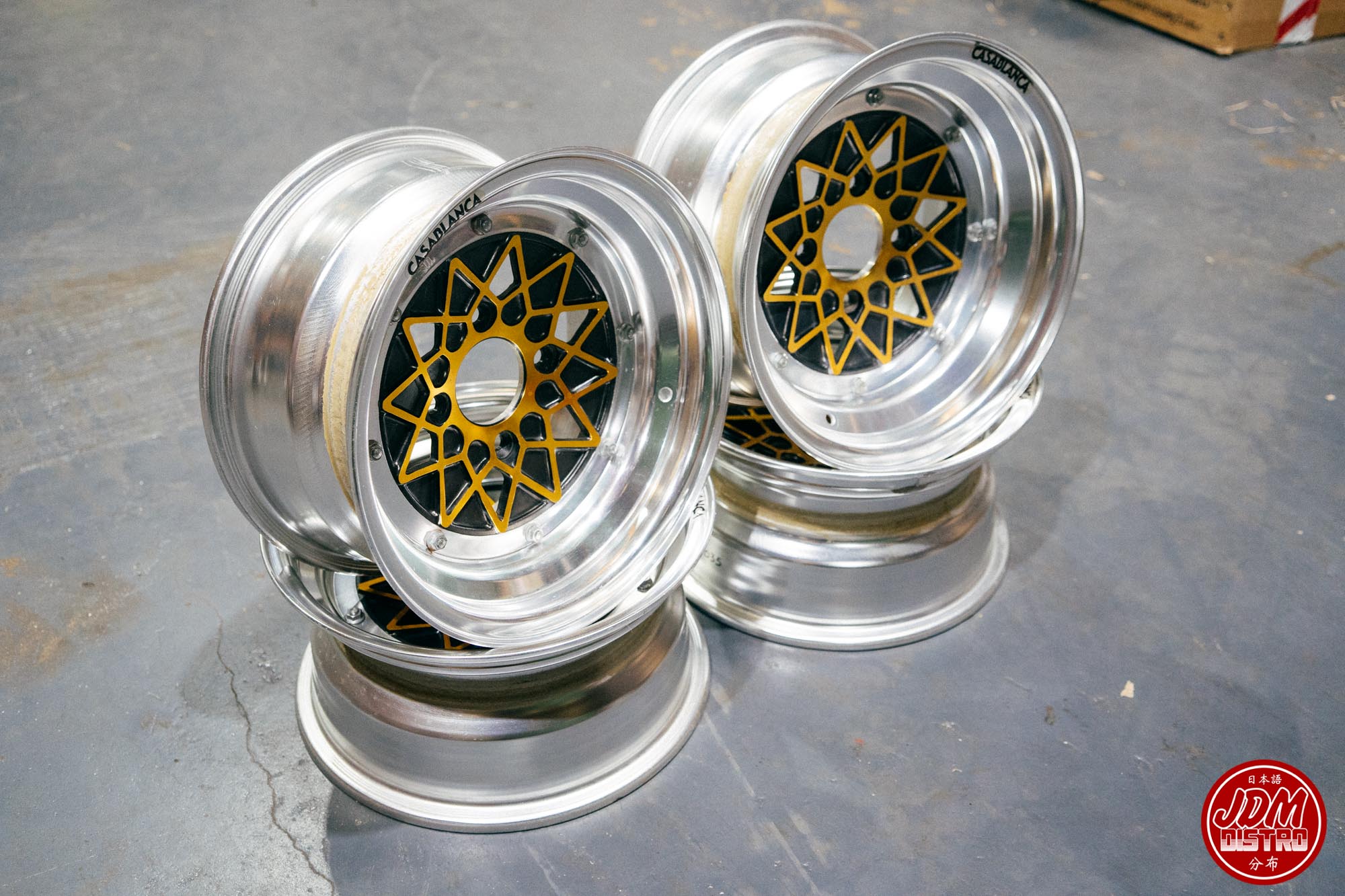 We couldn’t help but admire such beauty. The gold spokes with the black backing, easily one of the prettiest 14″ wheels I had ever seen. 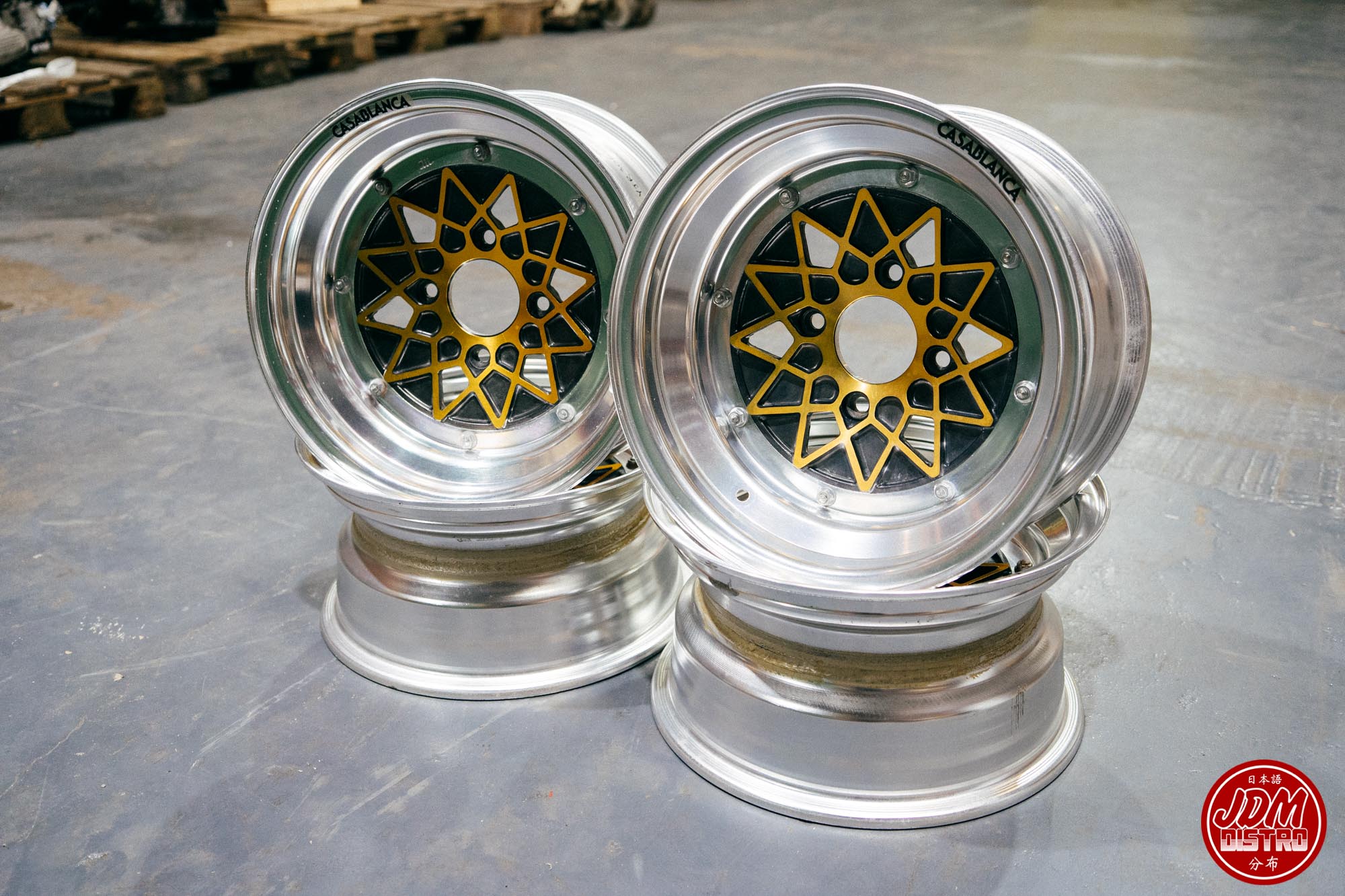 From every angle, they looked great. Look how clean those rear barrels are! I’m not sure tyres were even mounted to these. I can’t believe they even had the original stickers on the lip. Ok, that’s enough photos of these wheels, I’m sure you can appreciate the coolness just as much as we did! 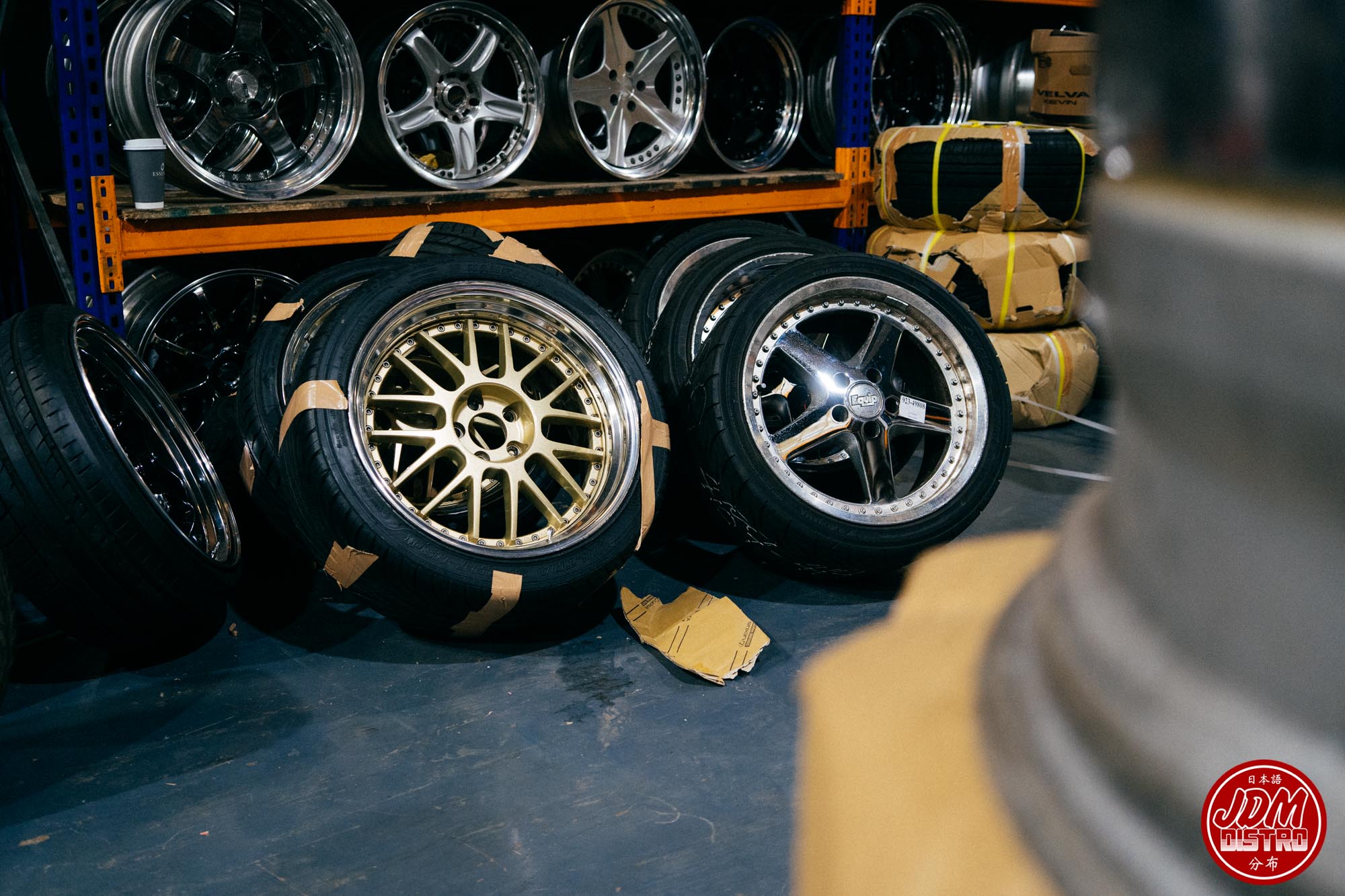 The Work Equip 05 always catches the eye, along with the not so common SSR MS1 mesh wheels… 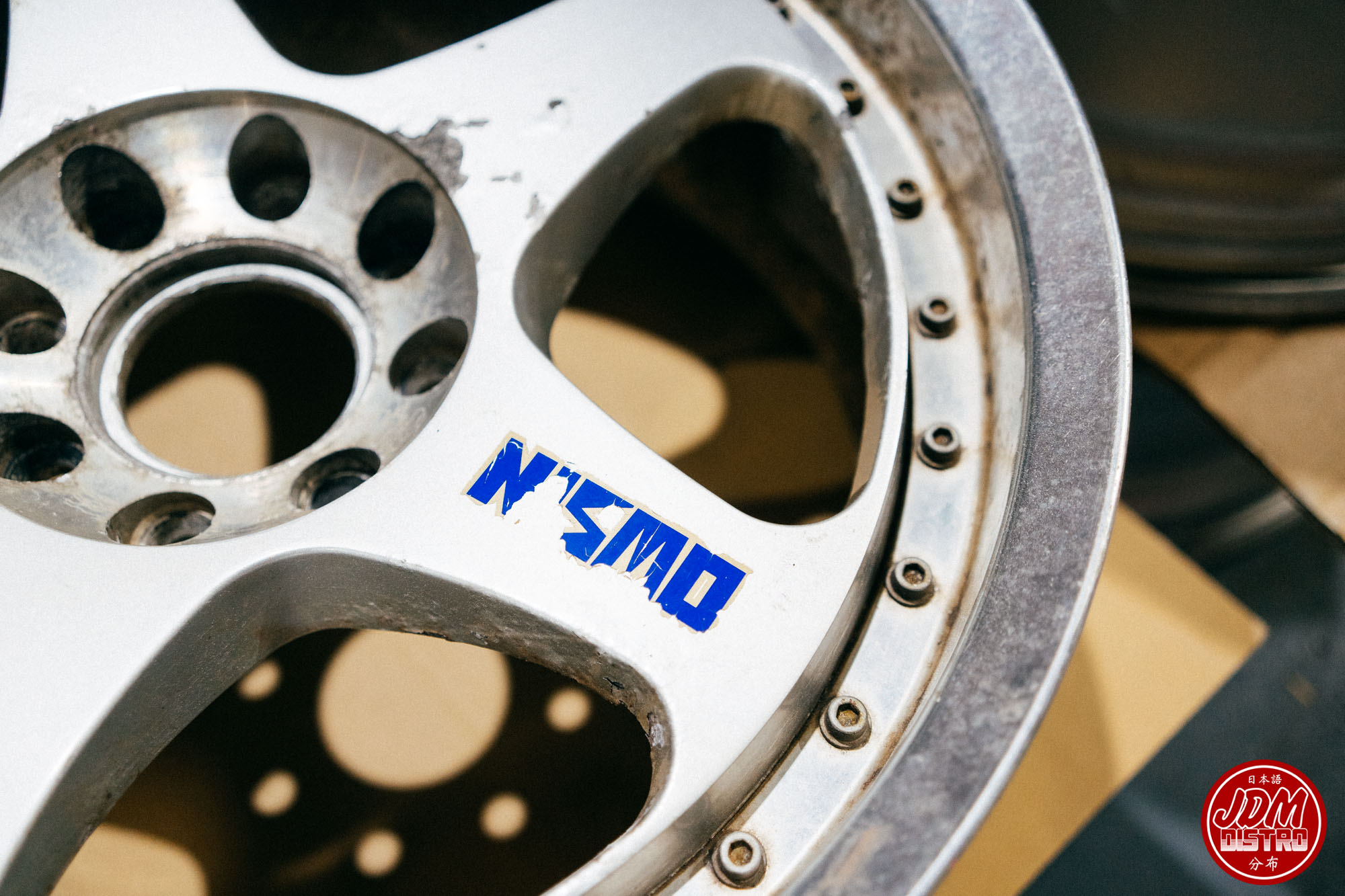 Nismo LMGT’s are getting harder and harder to come across, the prices have shot up since the Skyline and anything Nismo related could be fitted to the newly imported Japanese imports in the USA over the last few years. You can be sure prices are going to steadily climb over the next few years. 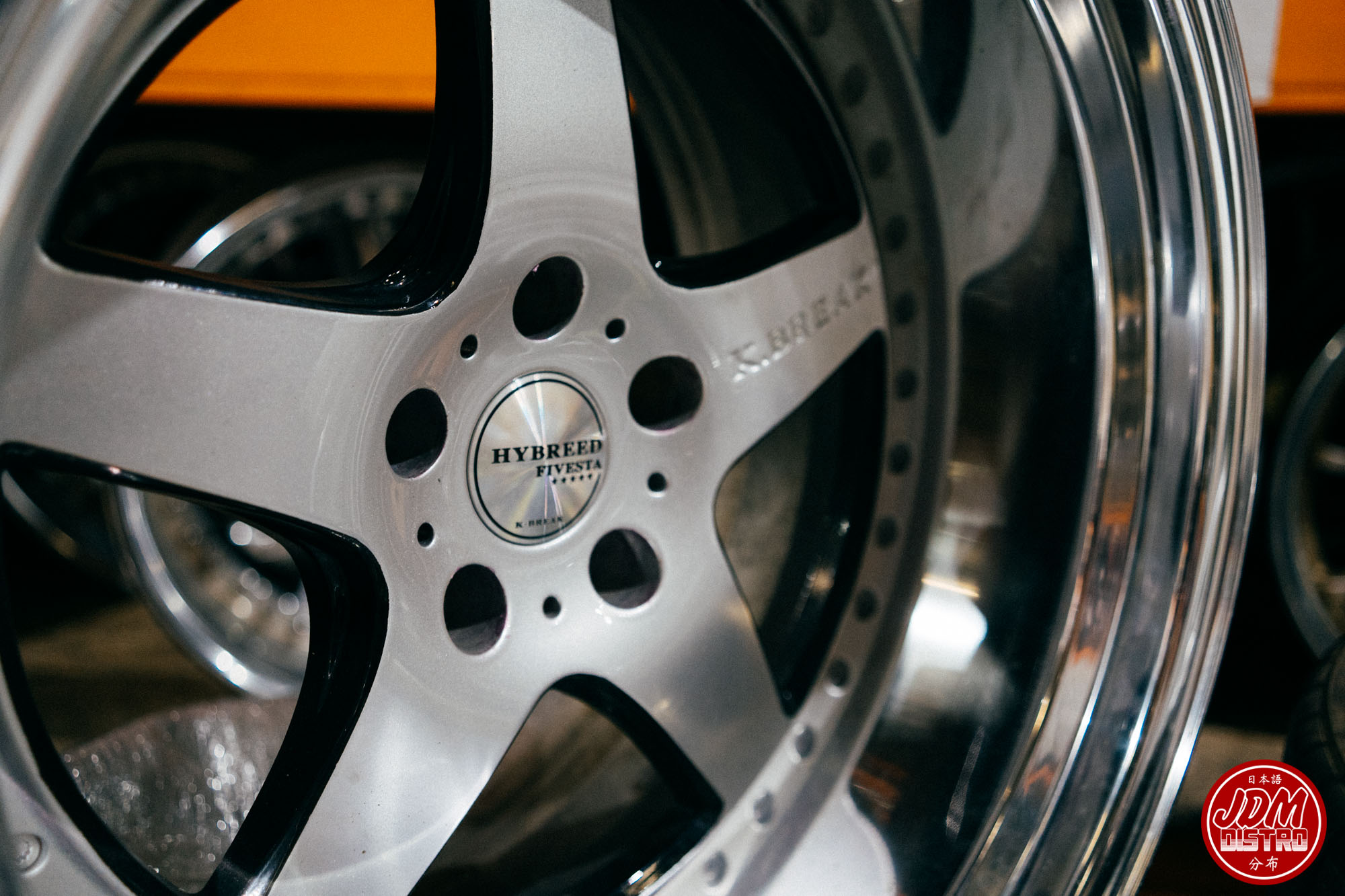 These wheels are called the K. Break Hybreed Fivesta, I guess the Fivesta is a chopped version of ” Five star” judging by the five stars on the centre caps. The Fivesta is aimed at big body sedans in the VIP world. We’ve had a few sets of these roll through the shop and all have been mega sizes. It will be interesting to see where these end up. 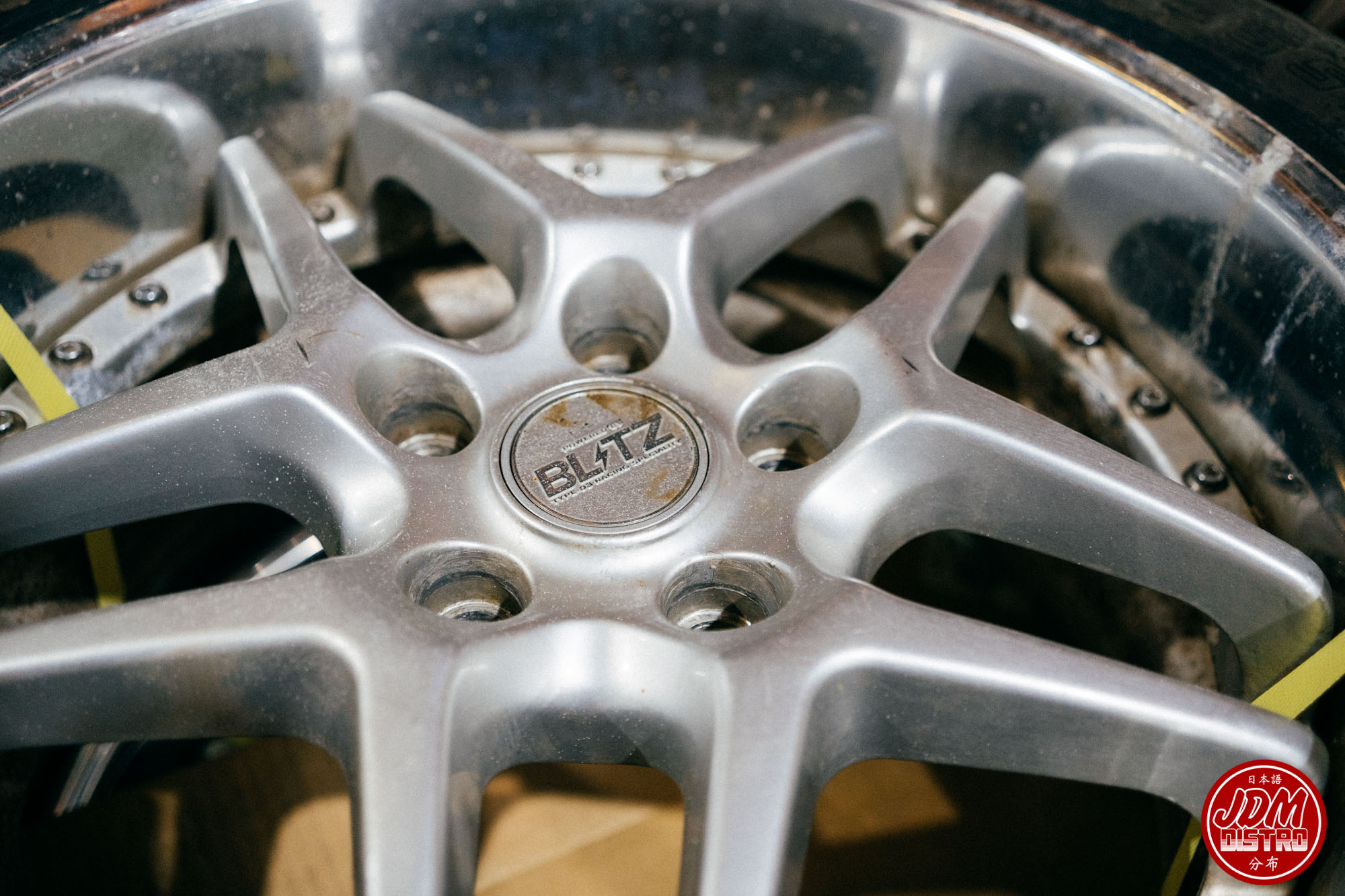 People have been going crazy for Blitz Type 03’s lately. Prices have doubled, if not tripled sets listed in Japan. We have been picking up pairs and full sets in all types of conditions for customers. 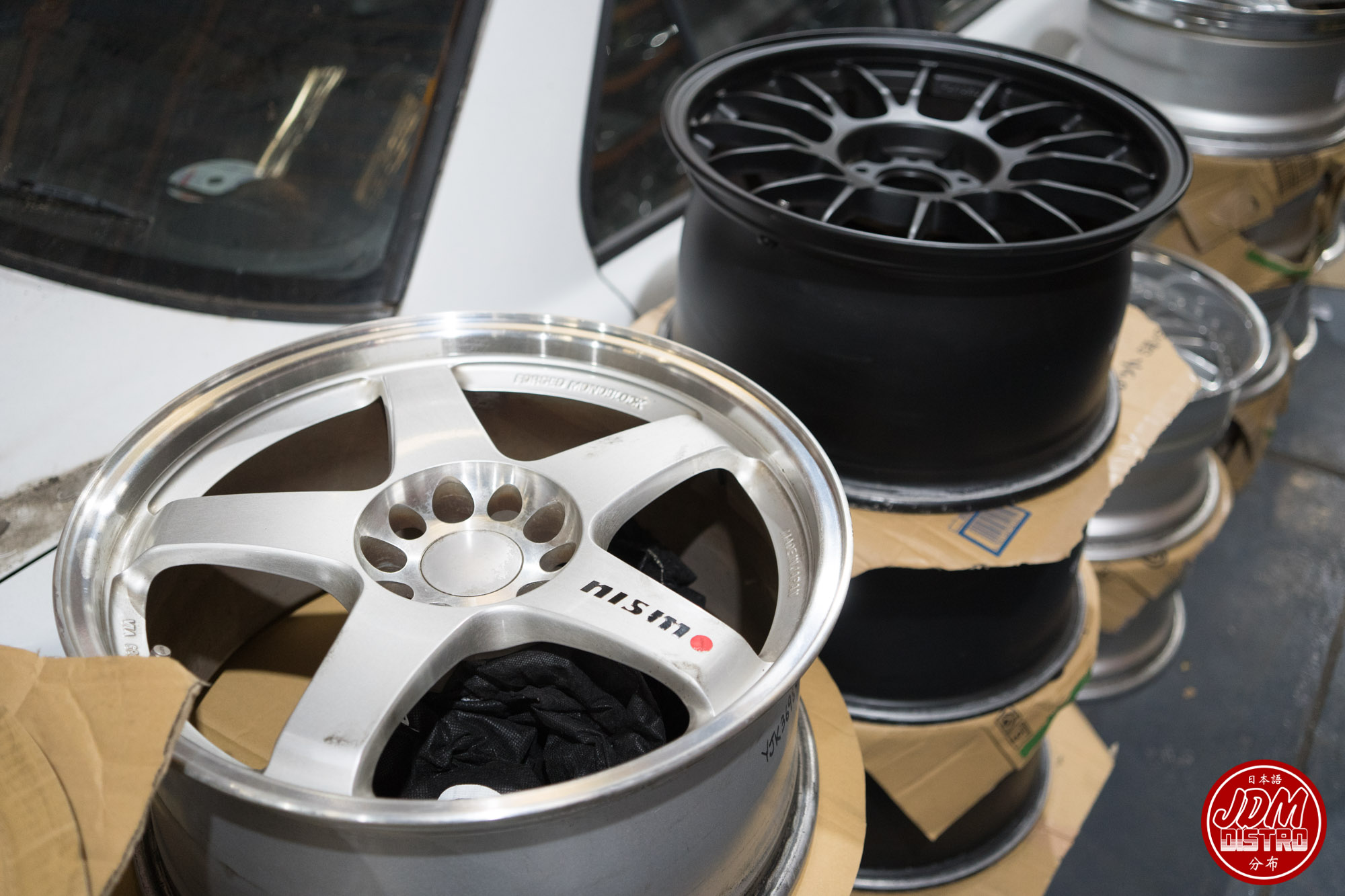 The LMGT4, made by Rays for Nismo is another wheel that has seen insane price surges in the last few years, we can still get sets for under 1500 euros if they are smaller sizes but anything in a proper GTR size and offset is easily over 2k euros. 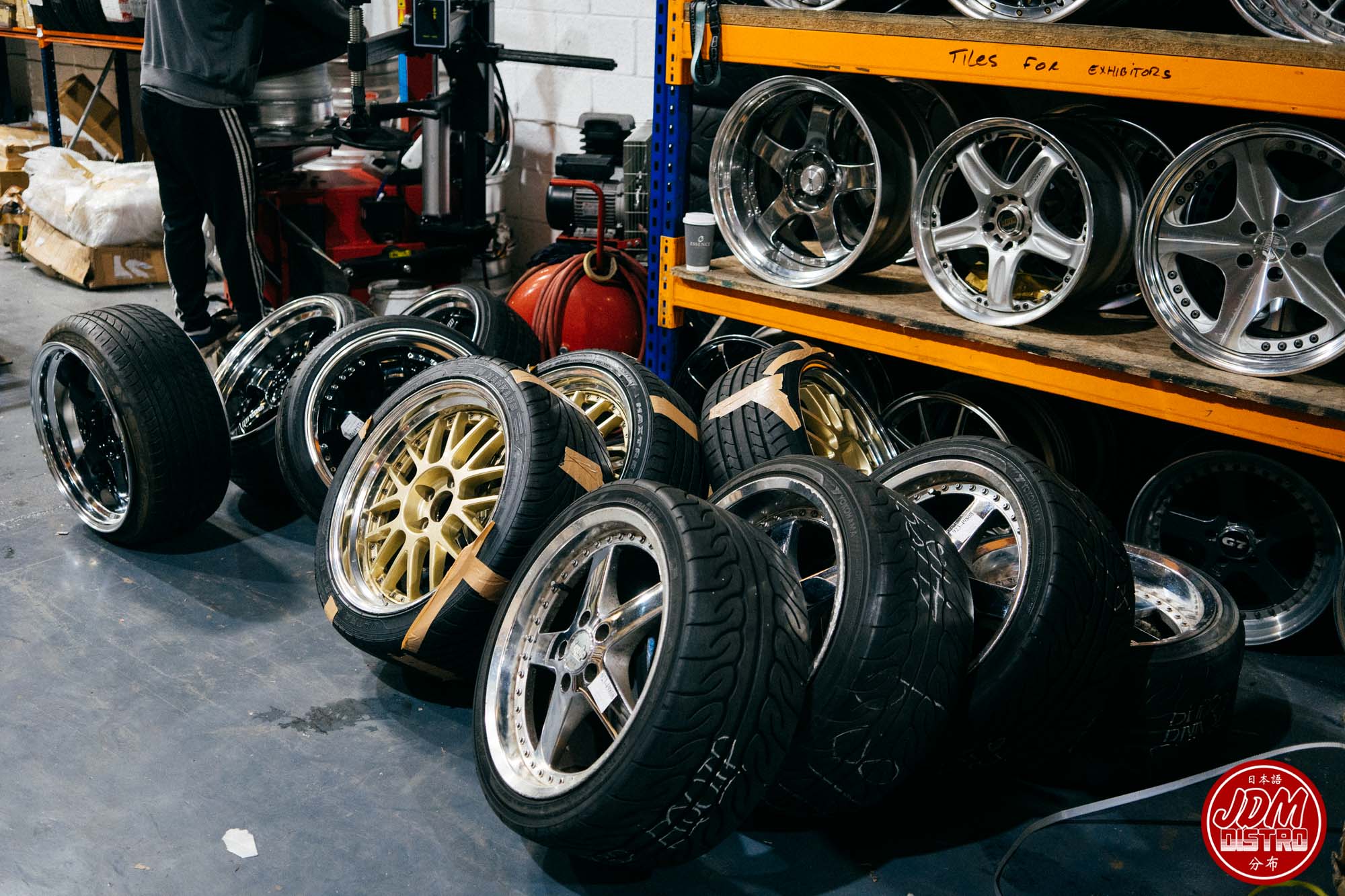 These wheels are waiting to have the tyres removed, poor Adrian has to tackle over 100 tyres with some of our containers. 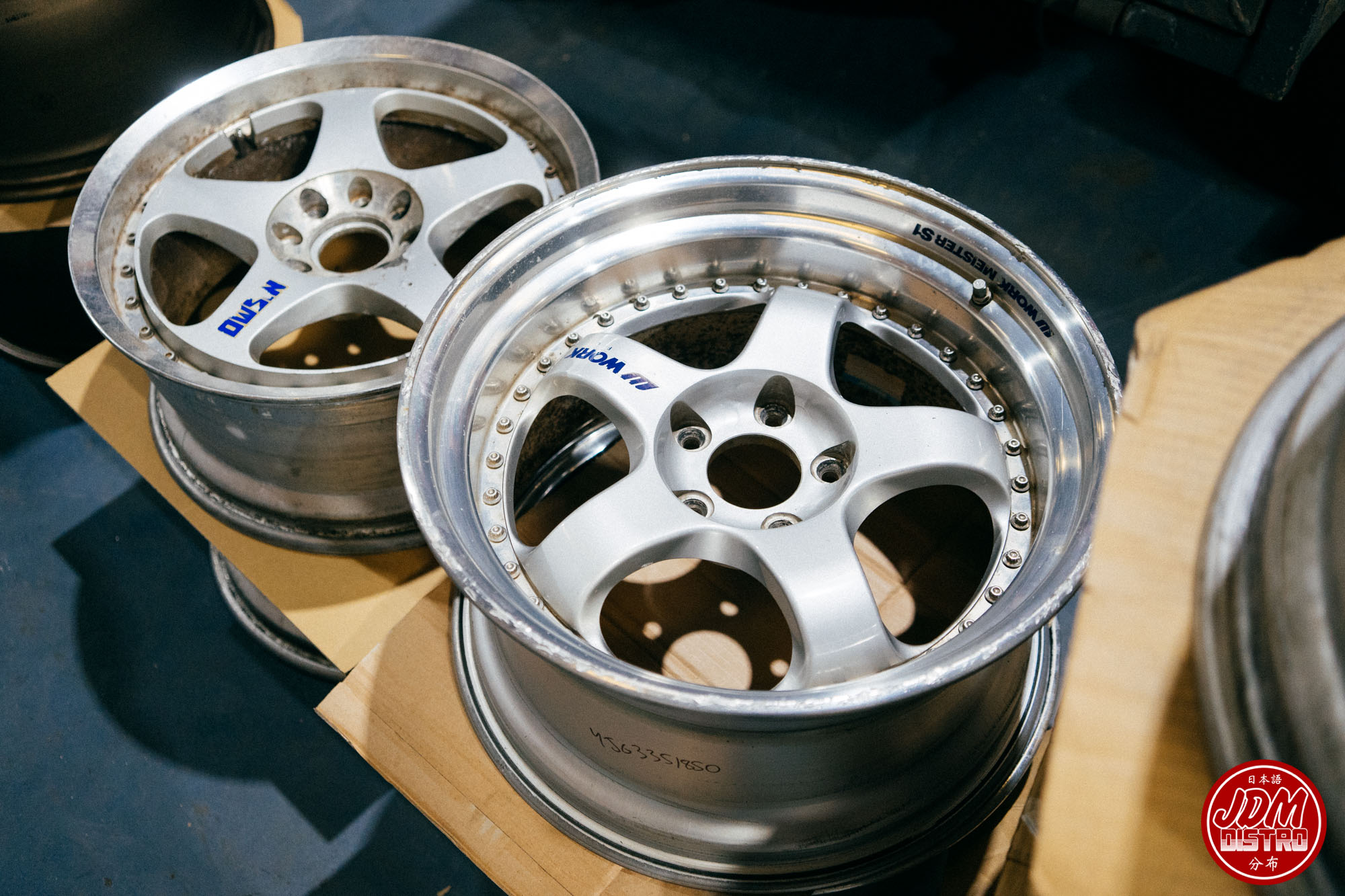 The Work Meister is just one of those wheels. It’s one of our best sellers and they look great on pretty much anything, from an eighties AE86 to a brand new Porsche 911. It’s one of the greatest designs to ever come out of Japan. 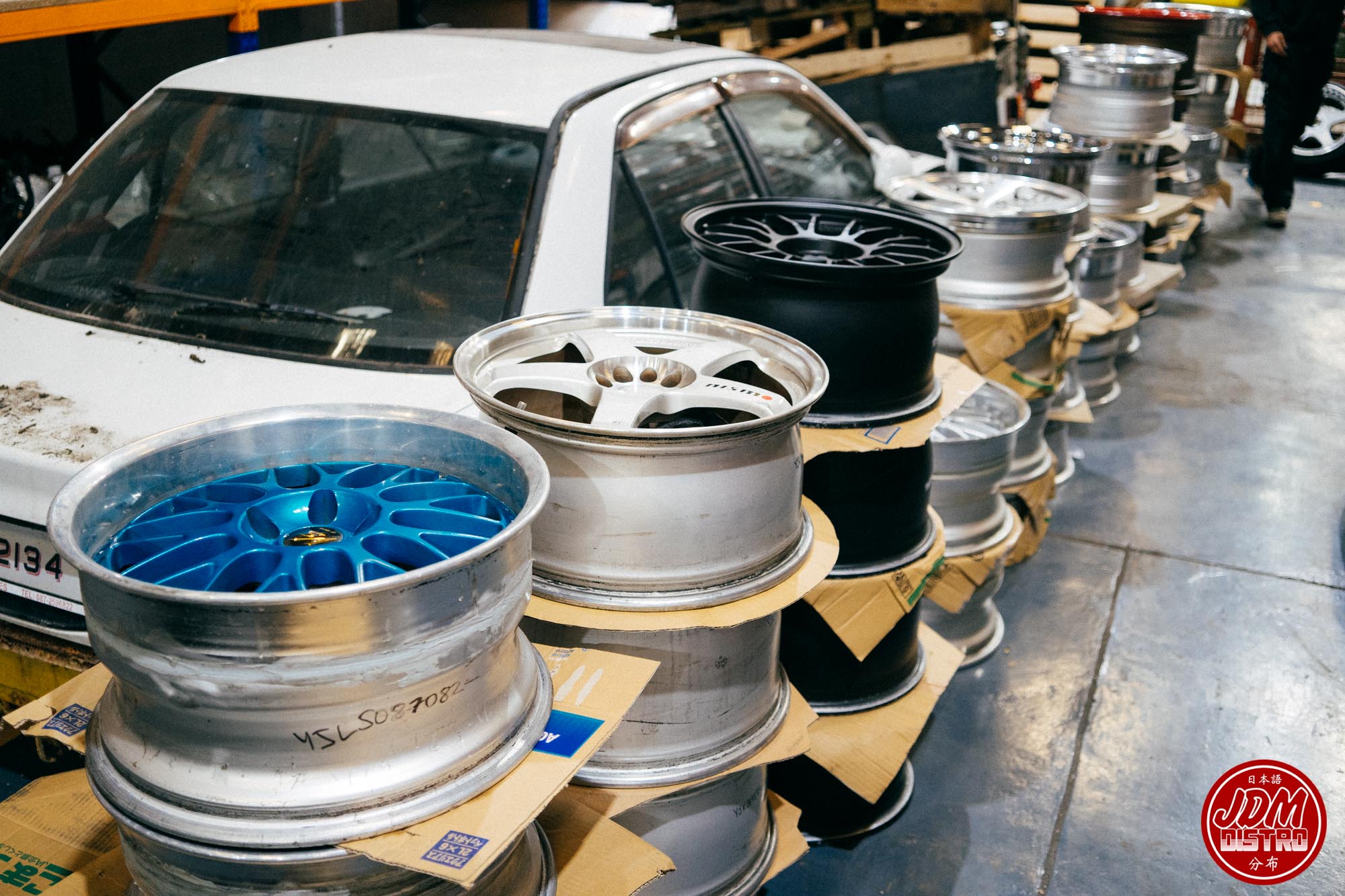 Not a bad line up! With each container, we almost fill our wheel wall. Wheels are mostly sold from each container so as they are being put onto the shelf for storage, many of them are going out the door at the very same time. The wall has never been fully stacked in this new location, we filled it once in our old warehouse so we were keen to get it filled at least just this one time. 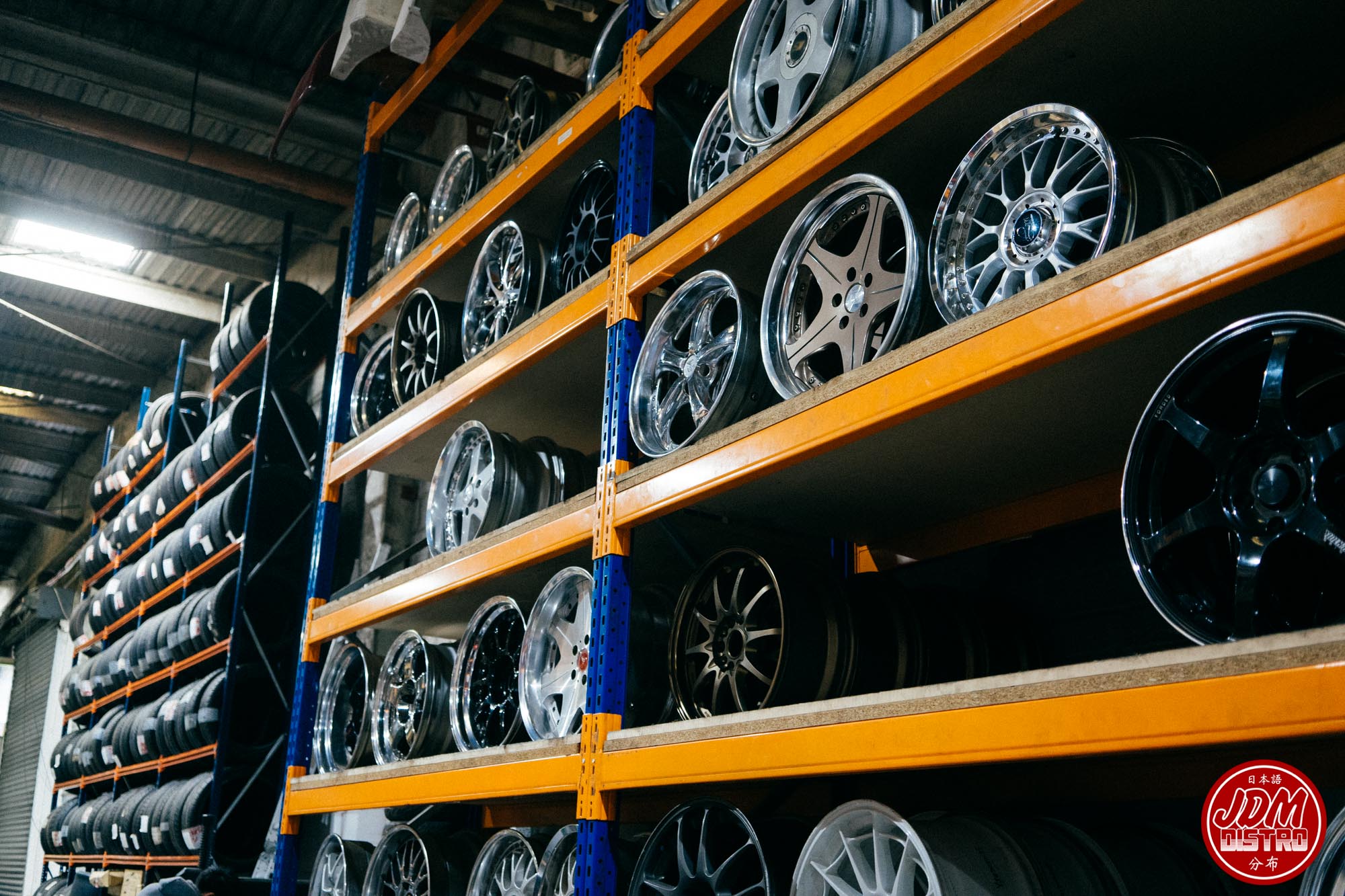 With an unusual two containers back to back in such a short space of time, we had a chance to make it happen. 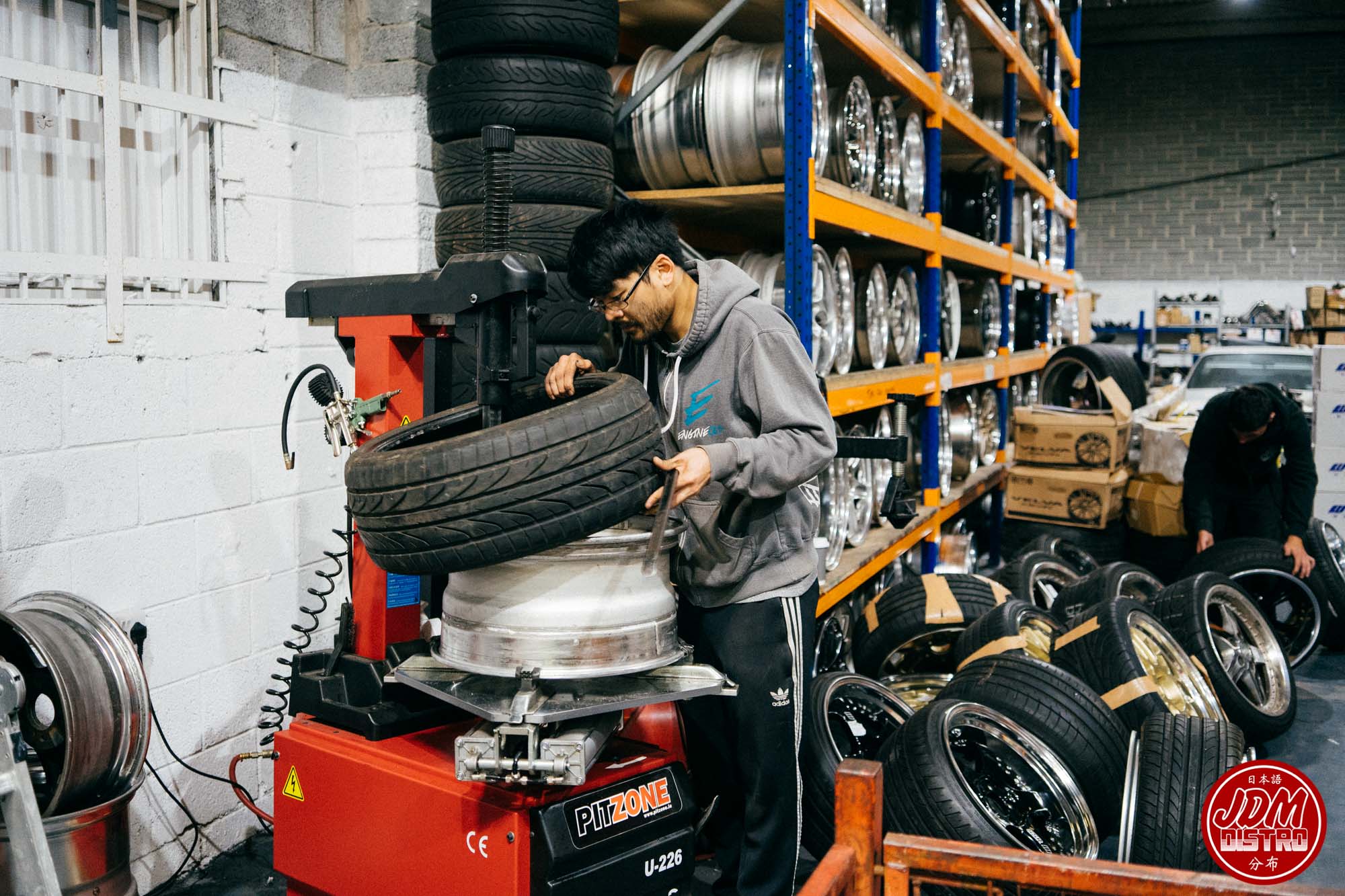 It’s cheaper for us to leave the tyres on the wheels in Japan and take them off ourselves, it’s not the most enjoyable task but it saves us a lot of money. Sean is popping a tyre while Adrain stacks the “to do” list behind. 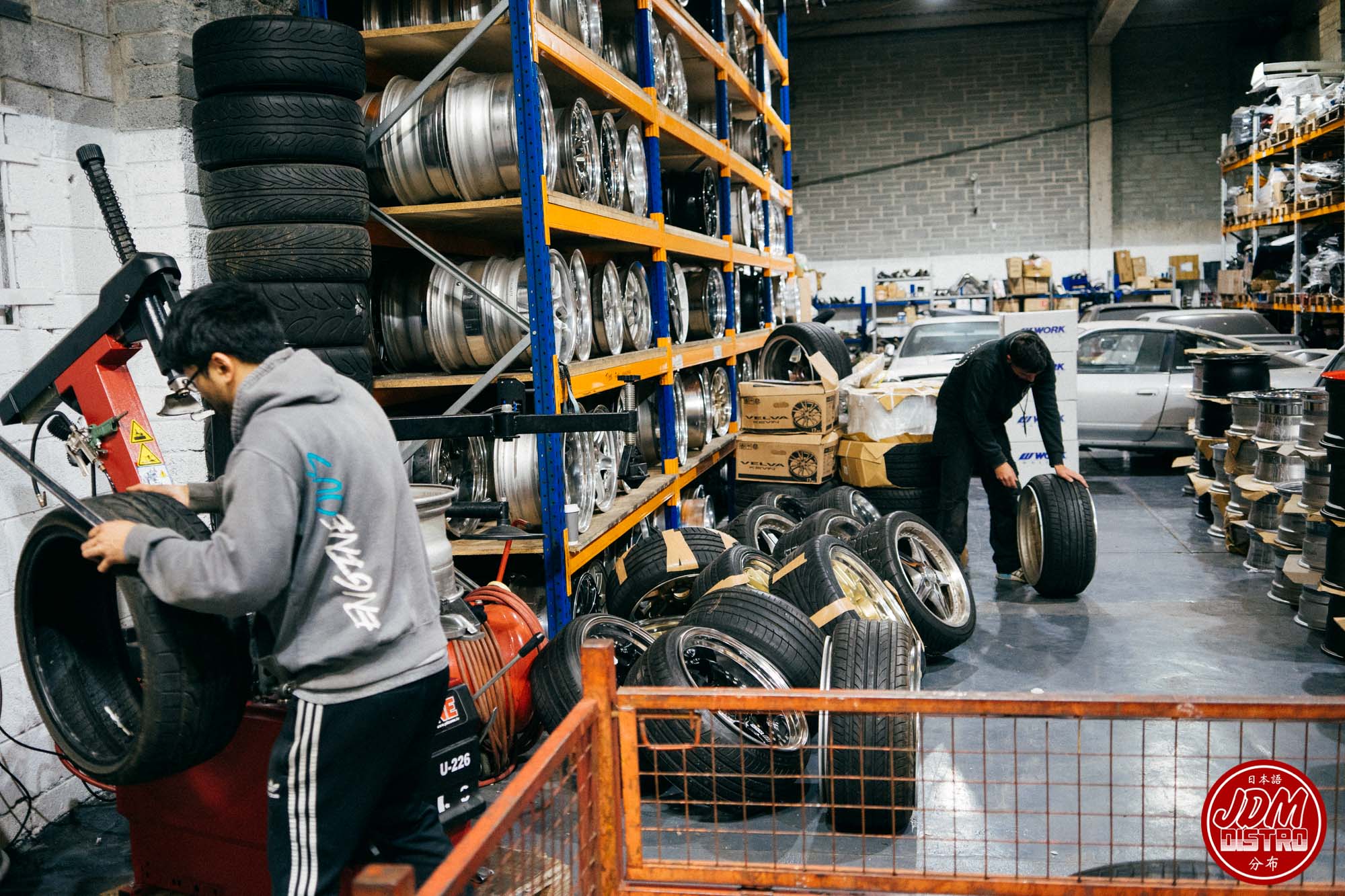 When they are finished, they are put into the stack of rims you can see on the right side of the picture. 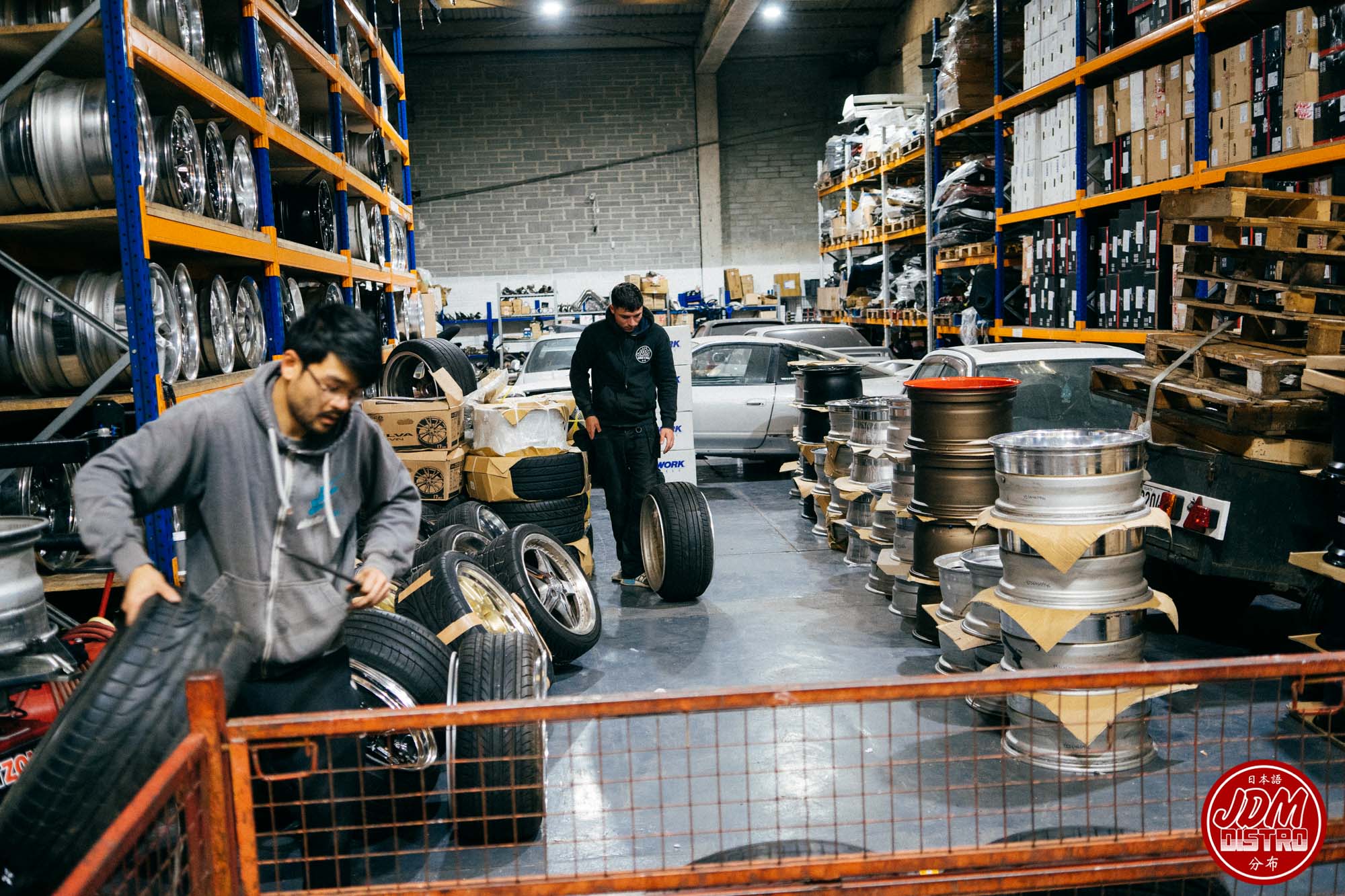 This is the most efficient system we have come up with to keep track of the process. 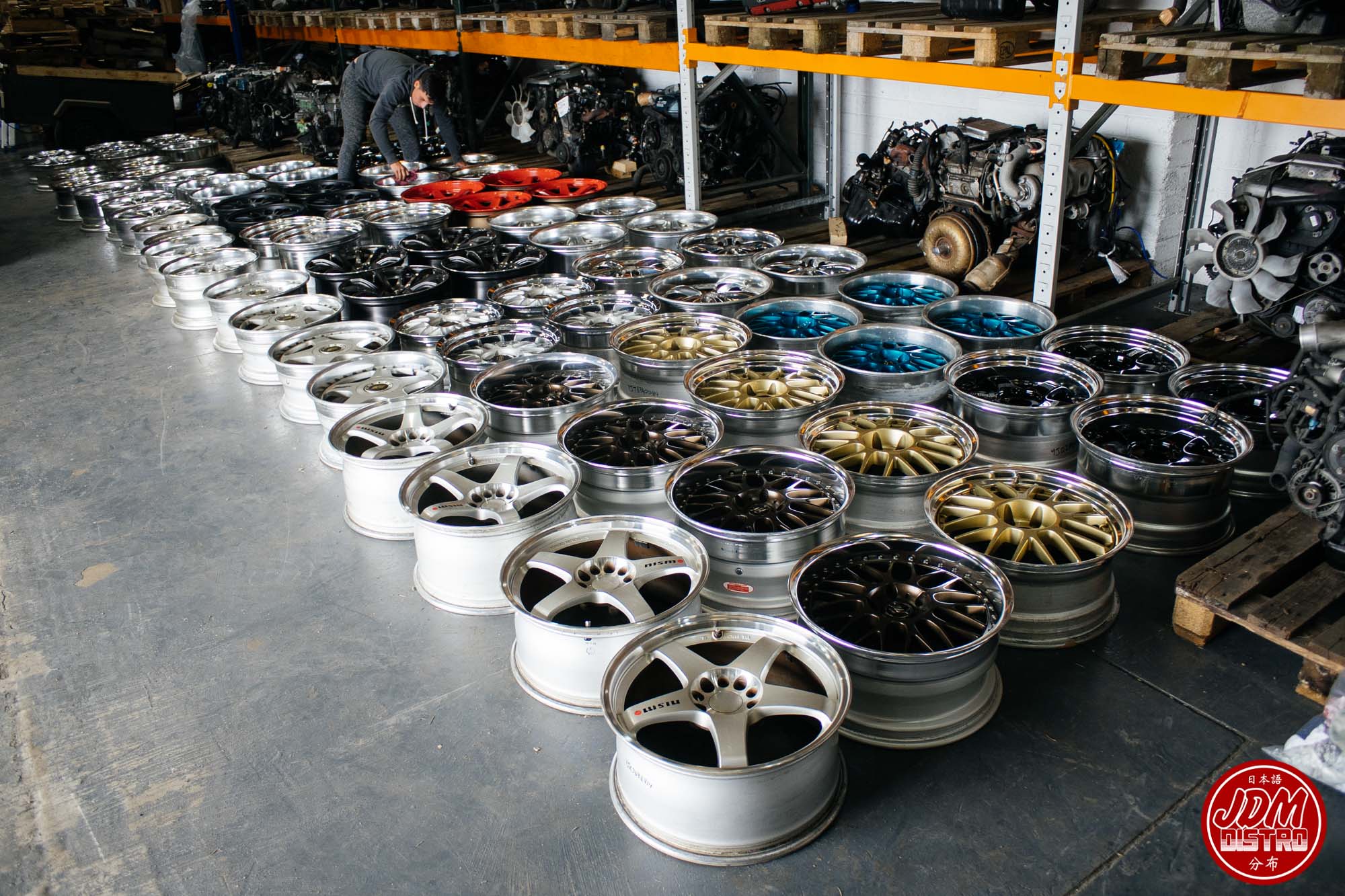 Eventually, all the wheels are laid out after being inspected. We clean them, add SKU’s to the wheels to keep track of them and work our way through them carefully, photographing each set for the site and then add them to the wheel wall.

This stuff all ends up on the site then over the next few weeks.