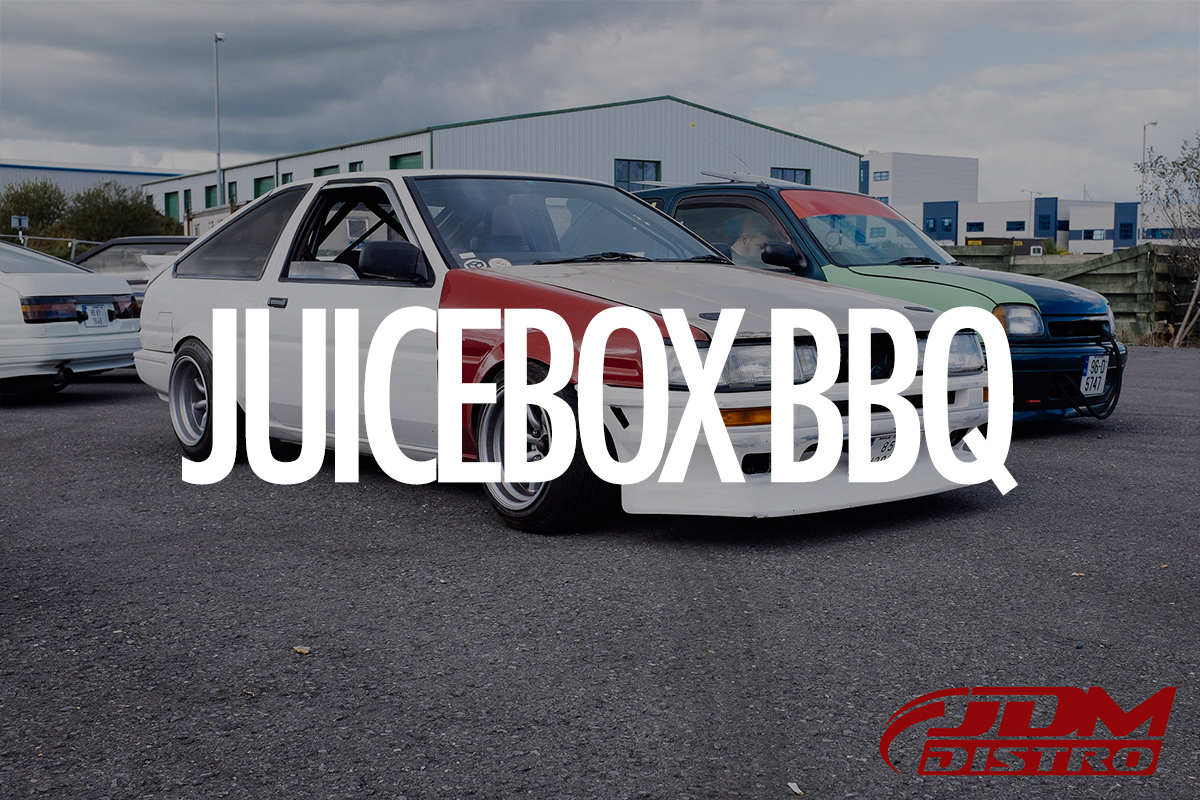 We take a look at the Annual Juicebox BBQ to check out some quality machinery. This BBQ is an invite-only event which is held every year at an undisclosed location here in Ireland. The cars are hand selected by the guys at Juicebox and invitations are sent out a week before the event takes place. Great care is taken to compile a decent list of cars which best represent the Irish car scene.

There was no shortage of solid machinery in attendance, Reubens C33 rocking some SSR mesh wheels is as good as it gets.

Ben brought out his A31 Cefiro sporting some P1’s up front and an angry RB25 in the engine bay, you don’t see too many Cefiros here in Ireland let alone Drift examples. I love the look of this BN kitted four-door 32 Skyline, it looks like it got lost on the way home from Ebisu.

A complete opposite was this immaculate OEM four-door 32, one of the most original examples we have ever seen.

We supplied these stunning chrome XD9’s for this fantastic-looking C35 Laurel. The chrome on white is a perfect combo. Speaking of SSR, it’s hard to top a nice set of MK1’s the wheel where it all began for the company. They complement the look of this simple KE70 perfectly.

It still blows my mind how cars like this made their way to Ireland and somehow survived here. This Levin has a history of competing in Drift tournaments all over Japan but now resides in Ireland and has been completely restored back to its former glory after a somewhat sketchy history. Another competition machine to appear was Adrian Walsh’s notorious AE86, this has seen many changes over the years, we supplied the Stunning TE37V’s which look awesome on this angry LS powered monster.

Its all in the shoes, Jackie Fitz’s DC2 looks good on some genuine whee;s, sometimes that’s all it takes. Some Advan RG’s out pack, complimented by a pair of Regamastes up front.

An underrated chassis which appears to be gaining some love in recent times is the RX8. This example was sitting on some Work XT7’s.

Our very own Dave Lee had his Vertex S15 on display wearing some immaculate man-sized TE37’s in bronze.

Dori Dori’s have been hiking in price as of recent in Japan, another highly sought after item which will only fetch an even larger price tag in the next few years. This patchwork Levin is all types of wonderful wearing some chunky Watanabe R type wheels. I’ll leave you here with this s15 rocking a set of bronze CST Hypers, one of the best looking wheels for an S-body.  It’s great to see such a solid following of genuine parts and proper cars here in Ireland, we are looking forward to seeing what happens for the next BBQ.